In 2006, under the guidance of John Iddon the respected race scrutineer, boat builder, racer and RYA official, the club was formed  to save the history of the sport its memorabelia and most importantly the racing powerboats that participated in the sport from its modern day origins in 1961 to a 30 year cut off date that being 1991, this included Classes 1,2,and 3 plus all sister craft related to or emanating from established builders…..The founding members felt that the modern sport with its extreme horsepower, sponsorship and diminishing entrants had “lost its way” and no longer evoked the camaraderie and purpose that existed in the formative years. 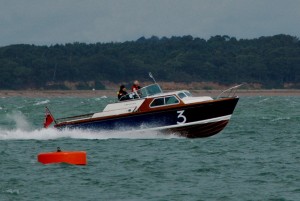 Coincidentaly at the same time as the club was being formed the winner of the first Cowes-Torquay, (the “Daily Express International Offshore Powerboat Race”)  Tommy Sopwith’s THUNDERBOLT a 25ft Bruce Campbell Christina, had been recovered from the garden of Don Shead the renowned designer and racer. She was being restored to original and to be readied in time to celebrate the 50 staging of the race, she made her first appearance in the revived 2007 Earls Court Boat Show in front of an invited audience and was unveiled by Tommy himself. 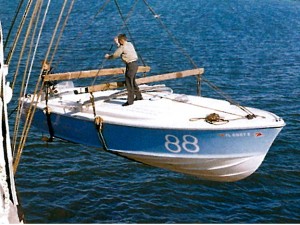 One stipulation laid down by the club was that members did not have to own a boat ! but since that first year more than a third now do and own some groundbraking craft from those early years including A’Speranziella, Sonny Levi’s 1963 winner which is now entering restoration for the 2nd time, Don Shead’s Trident, many of the Fairey Huntsman and Huntress craft and although not a club member in Germany, Wolter Greonewald continues the rebuild of the mighty Vosper built TRAMONTANA from 1963………Unfortunately many famous named race boats have been lost and still are including Spirit of Ecstacy, Gypsy Girl and the original Tramontana. Some have been sold abroad Tommy Sopwith’s race winning Telstar is now in Australia and Miss Enfield 2 sold to Italy for restoration, yet more are still hulks awaiting restoration, Blue Moppie and UFO but most have vanished forever…unless you know differently!. 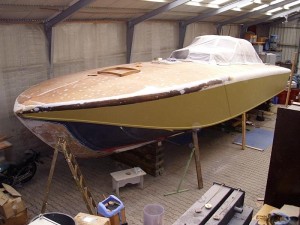 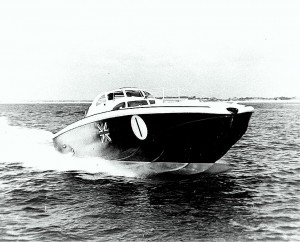 So if you remember those early years when you lined the coast along with thousands of other spectators to witness man against the elements or you had a favourite boat you cheered on and remember, if you now own a classic from the 60’s 70’s or 80’s we are the club for you.We can advise on restoration, marine engineering and wherever possible provide history on any craft you may be purchasing, if in doubt ask the experts COPC. 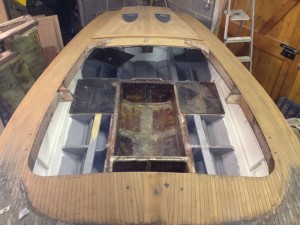