There are at least 2 of these Donzi 28’s somewhere in the UK, the original “GEE” was one and Billy Shand Kydd’s “LUCY TOO” the other…the design was another masterpiece from the Wynn /Walters pen for Don Arronow. BUT where are they ?, again some unsuspecting owner has a little piece of powerboat history under him….. 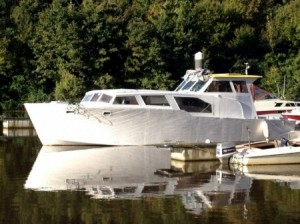 Spotted on Boats and Outboards in Marine Projects is this James Taylor Geranium Class cruiser, now I am not saying it is but it is qute possible this maybe “Geranium 2” herself…..any details of build no’s are long gone as is the company. Not the prettiest of boats but after all the late fifties did not produce many elegant designs…and the “project” boat has been bastardised anyway but it goes to prove that they have and do survive! so she could be another 1961 race survivor and yes its been converted to a live aboard!

Have just received email re the above..awaiting more news.

Lets start this new feature with a look at the 1961 entry list…and see what possibilities there are of survivors.Working with the total entry and known craft still with us fathom out what may still yet be found…1961.. 27 starters 4 known survivors

equals 15% of the original starters but if we work through the list it may come out considerably higher based on certain aspects ie builder, build material and size.

HUNTSMAN No8  Fairey hot moulded wooden laminate hull very strong, was given to Dartmouth cadets but considered to big for their use then vanished when sold on. It is a Fairey survival rate high owner unlikely to know history…….  update…name changed to Diamonds Dublin but later believed to have sunk after colliding with Bournemouth Pier!?

GAY GAZELLE built by Dorset Lake in high quality timber was last know in use 25 years ago but times have changed, a very large boat expensive to maintain. Maybe now a live aboard. Survival rate very low.

CORALIE  Another Campbell this time a single engine and an earlier hull.. could exist but most likely became a fishing boat and cut back, very few Christina’s survive intact.

GERANIUM 11  Built by James Taylor at Shoreham? Another big boat but built traditionally again of quality timber but a 50’s design. As Gay Gazelle big enough for a live aboard but expensive to maintain once rot sets in, may survive up some lonely creek but questionable. Survival rate low.

HUNT 34  A Port Hamble built 34 footer constructed of ply on frames, many of the smaller Pacemakers survive but here again a large costly boat to maintain and very rare but also a handsome looking craft which would work in its favour. Survival rate medium to low……

MONACO FORTUNA  Another monster boat but Morgan Giles built the old way with massive ribs and planking, many survive today in fact there is one looking for home on the web site and of course the beautiful Louly restored to perfection. Survival rate high.

YOYO   25ft BERTRAM PROTOTYPE ..Finished 2nd in the race to Thunderbolt…another solid Bertram glassfibre hull but did she go back to the States? Wynn arrived with YOYO 2 the following year. Both had custom built cabins and YO YO 2 had redesigned hull so maybe Bertram did take her back home. Survival rate high but 99% sure boat is Stateside.

BLUE MARLIN    R W CLARKS Mudie designed Force 8’s are a rarity now but we know of 2 survivors Sandpiper 2 in Northern Ireland and the restored boat for sale on the web site. Survival rate medium to high.

SNOWGOOSE OF SARUM …A Shakespeare outboard powered Cabin Cruiser, a rarity then and probably long gone to its grave.

THUNDERBIRD   The Prout Brothers Catamaran Cruiser, yes 1961 note, but have you ever seen one? neither have I, was it a prototype ? as they are more famous for their sailing boats…survival rate low!

IANTHE  The famous Watson/Westcraft that made the news that weekend it would be good to know she still survives in the EXE area somewhere but somehow I doubt it.

YEOMANA 111 Peter Thornycroft’s Nelson clinker hulled plodder that took all in its stride and finished the journey but out of time…many Nelson boats survive and it is highly likely she is one of them but where? Survival rate medium to high.

VANTAGE  As Yeomana above but smaller also out of time

DIESEL HUNTSMAN    A solid FAIREY built boat returned the following year as FAIREY HUNTSMAN then in 63 as HERE and NOW although this is subject to confirmation…A SURVIVOR and in use.

GRAYLING A small outboard powered cabin cruiser more suited to coastal waters unlikely to have survived to the present day.

BELLA  Fred Carvill’s ANCAS a Scandinavian built glassfibre hulled craft powered by a Volvo replaced by BELLA 2 the following year. Strongly built and probably a survivor, but where?

MURCAIN  Built by offshore stalwart Alan Venables. Who went on to bigger and better things, a survivor? don’t think so

SANDRA SPENCER  This was the boat that had house glass in the windows and china in the cupboards…she did not survive very far in the race and one doubts she has survived till the present day!

So there we go the 1961 entries those in Red we can assume have long gone to watery graves, those in AMBER are a very big MAYBE!and in green we have 11 boats which all things considered might well still or do exist ..a staggering 41% They maybe out there somewhere but where? and that is why the club exists to hunt them down.. try the exercise your self pick a race year, go through the boats one by one and see what turns up!

Oh and keep your eye on E BAY as that is where they are turning up!!!!

With interest in the “Classic” boat movement picking up I thought it an ideal time to start a hunt for all those “missing” boats that someone “last heard of at so and so” or was “last seen on the Medway” etc. You must all have had your favourite over the years, I was very lucky to find mine but others have been hunting for years! Take club founder John Iddon and his son John jnr they have been looking for the Seahunter “MOODY BLUE” which was powered by a Holman Moody Ford or any of their other raceboats which might be “for sale”!

Another boat which constantly comes up in conversation is Thunderbird/UFO ex Merrick Lewis and Tim Powell’s mount in the first Round Britain Race…again last heard of near Brighton?

Then you get the lucky breaks such as the day club secretary Martin Napier was in Lymington and spotted the 1962 entry Belinda 2 built by Britannia Plastics in Southampton but now restored by club member Jeremy  Pack who was totally unaware of her history. We know many boats lose their identity such as the moster that was Thunderstreak or Claudia 2/ Broad Jumper with a cabin disguising her history but she was spotted and is now back in the States…Where is Telstar’s sister Melodrama? again last heard of in a poor condition “somewhere on the South Coast”!

What happened to Flying Jackie?

Those early years had a multitude of distinctive boats all if surviving now unique venerable old ladies looking for a good home ….start the ball rolling send me your request and lets see what we can prise out of the woodwork!