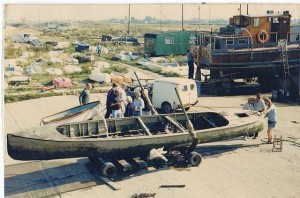 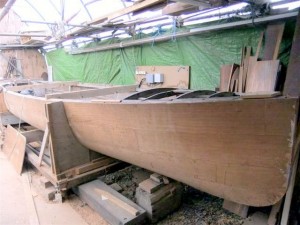 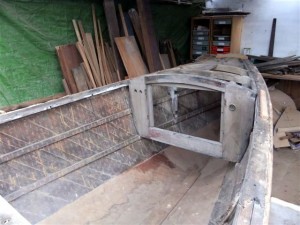 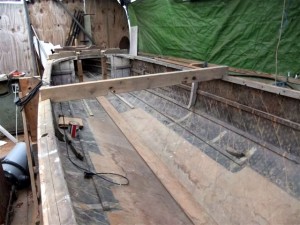 Back in 1984 Idug an old powerboat / launch out of the mud of Benfleet creek in Essex. As a young boatbuilder i had admired the hull ever since I was a kid & along with many others had on occasion tried to buy her. Her somewhat eccentric owner had an eclectic collection of over 20 boats all of which he managed to destroy through utter neglect.

The sole survivor was the launch & I bought her from his estate after his death.

She was Built By S E Saunders ltd in approx 1905 of  Saunders patent consuta sewn plywood construction. This was very light & strong but was extremely difficult to repair, consequently there are very few survivors. Apart from the original umpires launch Consuta & a couple of other umpires launches i knew of only 3 other surviving Saunders launches of this construction. My boat was unusual in that she had rolled angle iron frames in way of the engine bay with full length massive engine beds. This is almost certainly why she survived so long!

I with my wife did a lot of research at the old Motor boat museum at Pitsea & also at the National maritime museum, inc Loyds register.We never did identify her name or any history prior to 1935.

We did find some references in the Motor boat magazines from 1904-5 that Saunders started fitting steel frames to some boats around that time following some hull problems with boats being raced.

As to “was she a racer?” it would appear to be likely but we have nothing really to go on. Its obvious she was built to carry a large powerplant & in Ray Wheelers book From river to Sea  there are several photos of similar boats.

After quite a few years sat in the back of my boatshed I rebuilt the hull, this was a major task owing to extensive rot & ice damage.

Then a 10 year lay off due to our son arriving & too much to do!

Circumstances have now arrived where i have the time to finish her & I am looking forward to this as im now 53 & really need to get her finished!

If you have any ideas on where I might find any more info about her I would be grateful. Im also thinking that maybe somewhere in a dusty shed there might possibly be an unlikely surviving engine from the dawn of powerboating that needs a hull to live in!

Anywhere you can point me would be greatly appreciated.